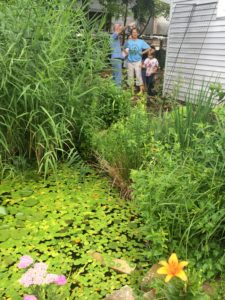 After three years of workshops in the GANG garden, we began a gradual transition which resulted in the garden itself transforming into a subset of the community, rather than the principal focus of community. In 2014, Rebecca Ellsworth, an organic market gardener for 40 years, moved in and became the Director, not only of the gardens but of the property itself. In 2016, we established the Green Acres Village (www.greenacresvillage.org). “community from the ground up,” seeing our village as nested inside the Green Acres Neighborhood, including gardens in what are now the front and back yards of three houses, all adjacent to each other. We also garden the backyard of the house across the street. Also in 2016, we established a small, successful CSA with three members. For the 2017 season we have decided not to do the CSA, but instead to sell our extra produce possibly to restaurants, or possibly to individuals, from a stand set upon the edge of the Village. We are also increasingly experimenting with various land-based, value-added businesses springing up in the Village, including ferments and teas, with the label Green Acres Alchemy.

Ann Kreilkamp will be presenting at NAPC. 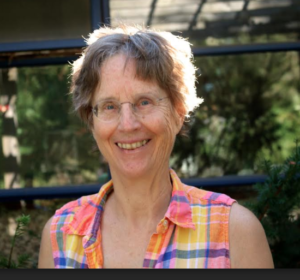 She will give a presentation on “The Evolution of Green Acres Urban Village.” Gradually, over a period of seven years, we have been carving out an intentional village atmosphere inside a conventional suburban neighborhood. The presentation will include and emphasize both the specific difficulties of working with this particular site as well as stories of how we are learning how to integrate shadow material, both individual and social. Begun as the Green Acres Neighborhood Garden, the site and its people have evolved into the Green Acres Village and Urban Farm with a four-member CSA, weekly Community Dinners, art, work parties, shared tools, skills, and projects, annual special events, that celebrate seasonal changes, and a continuously creative intergenerational and multidimensional awareness.

The presentation will be Sunday, September 18, at 2 p.m.
She will also be on a panel on Thursday, September 15, at 11:30, where we will focus on “Neighborhood Resilience.”

Rhonda Baird, ARC Secretary, will also be at NAPC as part of the core organizing team, coordinating the Media and Communications Working Group, and representing Permaculture Design magazine.

You can find out more about the North American Permaculture Convergence, which happens every two years, here.